I can't tell you where I got this, but it's certainly worth reading and a good indication of where we are headed.  Prepare if you can.


It’s a new game. The Federal Reserve made a major decision on Wednesday. They made it clear they cannot taper the purchases of treasury bills, bonds and mortgage backed securities. (T-bills and MBS) This gives us a picture of what is to come.
First, they are not confident that the US economy is strong enough to even slow the “money printing”. Their take on the US economy must be much worse than we are being told.
Second, no government in history has ever slowed or stopped printing money once they reach a point of continuous  Quantitative Easing, or “QE”. (bond buying or money printing, whatever you choose to call it by is not important). As of Wednesday’s announcement we see that our federal reserve is now in this position.
Third, this will have a major impact on US markets.
First impact, over time commodities will move higher, much higher, food fuel and precious metals.
Second, interest rates will begin a steady climb. We are going to see much higher rates. Each time the rates move up we may see additional “QE” to control rates. Any future talk of tapering is just that, talk. If they couldn’t cut back now, how are they going to do it later?
Third, the stock market after a short correction/contraction will continue to move higher no matter what the economic signals or earnings are. Volatility is going to increase. The correction maybe mild or violent, but it seems to have already started.  We have entered the phase where markets follow the “new money” up. This happened in Germany during the Weimar Republic and again in Zimbabwe during their “QE” period. These are not the only examples, just the ones that are well known.
This is a good chart that shows the corrections from the last 4 FOMC meeting announcements that caused a rally and 52 week high on the announcement. The average sell off was 12% with an average duration of 77 days. Note that each sell off went below the previous high, that would be 1475 this time. 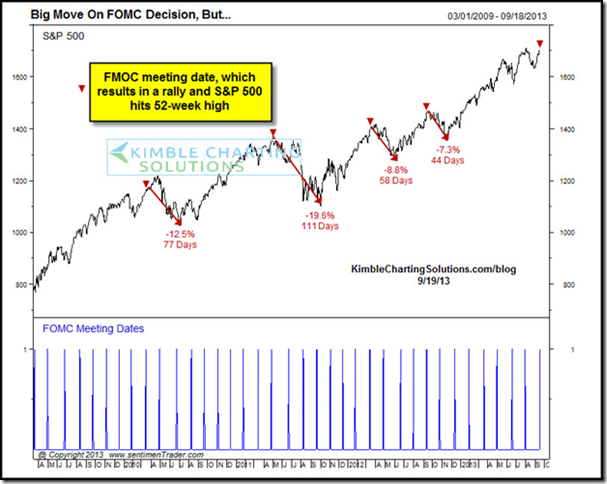 We should expect a new uptrend after this correction with new higher highs once again. The hard part is choosing which funds / stocks to invest in and then when to exit those positions.  We will be looking at commodities producers, such as oil companies as well as precious metals and food stocks.  The mutual funds that have performed the best during the past QE periods will also be a strong consideration.
Posted by The Chief at 9/23/2013 06:08:00 AM