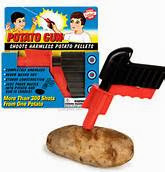 Apparently, possession of a tater gun can result in a raid by the Coast Guard.

Actually, that was simply an excuse to violate the First Amendment rights of a journalist who had caused a Federal agency to feel 'embarrassed'.

Well now they do have something to be 'embarrassed' about (but they're not).

Now it's the Department of Transportation pointing guns at citizens.

The Federal government is completely out-of-control!