‘Duck Dynasty’ Star: A Vagina Is ‘More Desirable Than A Man’s Anus’ 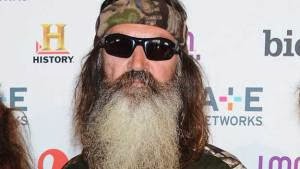 “It seems like, to me, a vagina – as a man – would be more desirable than a man’s anus. That’s just me,” Robertson stated. “I’m just thinking: There’s more there! She’s got more to offer. I mean, come on, dudes! You know what I’m saying? But hey, sin: It’s not logical, my man. It’s just not logical.”
Robertson described in the interview how sin is becoming acceptable in America and that the country needs to turn back to its Christian values.
“Start with homosexual behavior and just morph out from there. Bestiality, sleeping around with this woman and that woman and that woman and those men,” Robertson told GQ. “Don’t be deceived. Neither the adulterers, the idolaters, the male prostitutes, the homosexual offenders, the greedy, the drunkards, the slanderers, the swindlers—they won’t inherit the kingdom of God. Don’t deceive yourself. It’s not right.”