The Roots of Our Demise

As popular as Franklin Delano Roosevelt was and is, he is largely responsible for the sorry state the United States now finds itself in and the reason we now have a Muslim, anti-American, illegal-alien sitting in the White House.

The so-called progressive liberals now in power and in firm control of the news media, public school system and universities are to a large extent the prodigy of Joseph Stalin and Franklin Roosevelt and the National Education Association (NEA) which is the largest teachers union in the world. 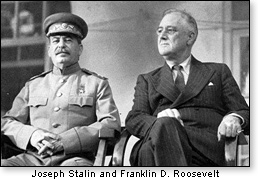 Stalin's secret agents: and why their deeds still matter in the 21st century: