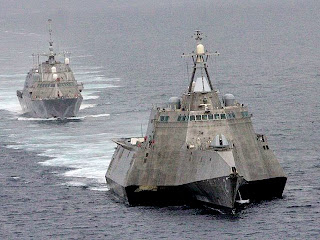 Just as satellites can't replace HUMINT, Computers cannot replace sailors.  The Navy is screwing up big time with this concept.

Business Insider:   The Navy's troubled Littoral Combat Ship (LCS) USS FREEDOM has sailed to Singapore on its first deployment and into another host of potential problems.
Andrea Shalal-Esa at Reuters reports the ship was tested by Navy hackers for cyber-vulnerabilities when it first arrived for its eight month tour abroad. The tests showed "vulnerabilities", but the Navy isn't letting that get in the way of its first official deployment.
The LCS is designed to perform close to shore and with as little crew as possible while relying on its mammoth central computer. The computer accepts interchangeable mission packages (MPs), or modules, designed for various types of missions. They're supposed to aid in everything from navigation to tactics.
All of which is great, but with a skeleton crew of 40 sailors manning a nearly 400 foot ship, that networking ability is key to the vessel's mission and survival. And if the network gets hacked it could raise no end of issues and concerns.