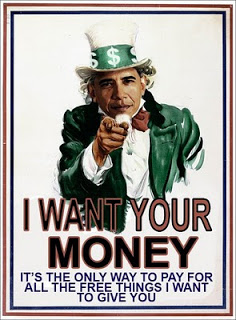 I had a dear uncle whom I was very fond of. I traveled the world and was so proud of the relationship I had with him and I proudly wore the clothes which identified me as a member of his family. I was prepared to defend him and his honor with my life. I had his back and I believed he had had mine.

I don't much like that uncle any more, and what's worse, I don't trust him.

He's become domineering, demanding, mean spirited, and even demented. He feels no loyalty to me, but demands it of me. He seems to care more about our neighbors than he does his own relatives and has gone on a spending spree which will rob the future of the entire family, and he is a pathological liar.

I am hoping the rest of the family will join me in a drastic intervention to rehabilitate the grand ole uncle I loved so much.
Posted by The Chief at 4/14/2013 06:16:00 AM