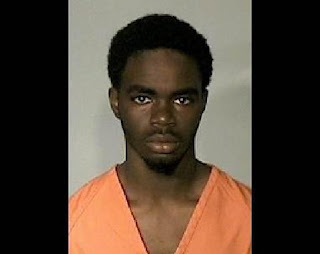 In late March 2013, 17 year old De’Marquis Elkins shot and killed a 13 month old baby who was sitting in a stroller.


Elkins shot the infant in the face after the mother refused to give him money.

He also shot the mother in the leg and the neck in Brunswick, GA.

De’Marquis Elkins is not a member of the NRA.

He did not use an assault rifle.

He did not get his stolen pistol from a gun show.

His favorite music is rap.

He did not attend Christian school, nor was he home schooled.

He did attend multicultural public education,
and was not instructed in the Ten Commandments.

His Momma was on welfare, got food stamps, and lived in public housing.

His daddy was not around, and his two brothers have a different daddy.

He already has a record for violent crimes.

He is a gang member.

His mom, grandma, and Aunty all voted for Obama.

He never earned his hunter safety card, nor did he shoot CMP, Junior NRA, or 4H Air Rifle Competitions.

He was never instructed in gun safety from his father or grandfather.

His public education and family taught him that the white man owes him something.

He went to collect it.

He has no plans on getting married, but does have a Baby Momma, and no, he is not supporting her baby.

He does respect Kayne West.

While he has no job, nor is looking for one, he is well fed.

He has no skills outside of crime.

He speaks Ebonics, and is not capable of doing a professional interview, even though he spent 11 years in public education.

He is one of millions.

This is what we are up against.  Make no mistake that people like Elkins will have their guns.  There are people wanting to deny you the right to arm yourself.  Your tax dollars are paying for the continuation of a system that breeds pieces of shit like this one.
Posted by The Chief at 4/24/2013 06:56:00 AM